Normally I feel I owe it to a play to let it marinate overnight before putting fingers to laptop, but it’s nearing midnight and I’m not leaving the light of my MacBookPro until I sweat out some of the intensity I absorbed at the premiere of Master of the Crossroads—the new play at the Bridge Theater written and directed by Obie Winner and character-actor-you’ve-seen-in-almost-everything, Paul Calderon.

Out of all the 93 credits Calderon has listed on IMDB, you probably know him best from his only line in Pulp Fiction—“My name’s Paul and this shit’s between y’all”—a line that I and millions of other 40-year-olds have eternally burrowed in the bellies of our brains.

In the first few moments, as the theater turns black and the sound of discordant jazz music fills the room, you just have that feeling. Set in the ghettos of Baton Rouge, Yolanda (Sarah Kate Jackson) has just stopped by the house of her ex-husband Cornbread (Nixon Cesar), to drop off his medication. There she discovers he has a stranger tied up to a chair at gunpoint, threatening to crucify him. She flees to the house of Cornbread’s estranged brother Jim-Bo (Obi Abili), where the play begins, pleading with him to go over and confront his brother, who is an Iraq War Vet with P.T.S.D.

In the middle of getting dressed to go to church, at first Jim-Bo brushes her off, but it doesn’t take long for Yolanda to rope him into her hysterics to where the guilt proves too much.

The rest of the play is one of the most physically intense hours of theater you’ll ever see. There’s a reason the Playbill warns in bold italics: Please note that this production features nudity, racist language, and graphic violence in a very intimate setting.

At first it’s clear what’s to play out when Jim-Bo arrives at Cornbread’s house: Jim-Bo, the pacifistic, church-going boy with his wits about him, and Cornbread, the crazy loon answering the door buck naked with a shotgun trained at the peep hole. But as each of their pasts scream to the surface, new information rears its ugly head – Jim-Bo also was an Iraq War Vet with severely unresolved P.T.S.D., at times even more unhinged and amplified than his “certifiably insane” brother’s.

Crossroads is the theater experience equivalent of a Rothko painting—you don’t really go to see it for the form or the shape or even the story, you go to have it make you feel something, to take you on a visceral ride. A drama about mental health and who we turn to for help when no one else will, it’s a sit-back-and-be-prepared-not-to-so-much-as-itch-an-itch type of play from beginning to end. At points the broken brothers are going at each other with such impassioned volume, I wondered if they could be heard all the way out on 8th Avenue.

With Sarah Kate Jackson’s jittery Southern drawl that had her bobbing and twitching around the stage like a young Kathryn Hepburn on speed… to Abili’s quiet elegance that turns on a dime… to Cesar’s almost frightening Herculean explosiveness – give them all Tony noms. There, I said it. 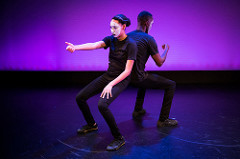 What within ourselves can be shed, exposed in its imperfect state? What methods do we employ just to manifest a shell in which we can protect and numb our senses?  Broken Box Mime Theater’s production of SKIN explores these questions through vignettes of wildlife, furtive and frightened love, adolescent innocence, family dynamics, the self-dissatisfaction when making art as well as deconstructions of pop culture.  On the whole, the production succeeds in developing precise, engaging narratives which are both poignant and rife with vulnerable humor.

The bare stage is adorned with vibrant, welcome projections from Jacqueline Reed, rich and atmospheric lighting design by Jamie Roderick, and one hell of an artfully chosen soundtrack.   While the playbill offers further explanations into the nature of each scene, I’d advise you to skip it, wait until after you’ve seen the company do their work. Art should stand up on its own, complete with specificity and a vivid and continuous story.  While pantomime has perhaps one of the hardest roads to travel in order to reach this goal, it’s clear that this company can create detailed works with their disciplined physical prowess.

Withthis in mind, I’ve only got a few nits to pick before I discuss some of the gorgeous, unguarded performances in the show.  The Answers, Fall from Grace, and Love Song don’t have as much focus and impact as their descriptions in the playbill would like you to believe.  [untitled] takes a two-minute idea and stretches it throughout the evening, when we can see the ending coming a mile away.  Lastly, Variable feels like a repetitive school exercise rather than producing new and surprising revelations.

What’s a joy to watch, and why you should absolutely see this production as well as any additional work Broken Box Mime Theater produces, are moments when the company allows a concept or relationship to truly feel heartfelt and absurd.  Boys Syde is a perfect dark comedy. Survival Mode takes its welcome time to weave between what is real and what is desired, and the effect lingers long after the production concludes.  Would You Put a Hat on a Ball of Sunshine… and The 16th Annual Brooklyn Beard Awards audibly made me shake with laughter and warmth.  Coming This Fall is comic brilliance – in fact, I’d watch a whole hour and a half alone of the company doing animal work.  Sunday aches with a smooth, giddy passion.  Hashtag is fantastically directed, flawlessly connected, and just heartbreaking.  Lastly, The Lake and Skin gently nudge at the desire to feel kinship and slowly break out of one’s comfort zone.

I’m grateful that a fiercely talented ensemble company like Broken Box Mime Theater exists.  In a world of artists seeking to peacock and proclaim their singular greatness, BBMT trusts in the work of its group to support and challenge one another.  SKIN is ultimately an evening of the collective prosperity such artists can yield within the rubric of an art-serving company, rather than a performer/creator-based one.

Have you ever wanted to be a superhero? Or to be thrust in the middle of the action on Game of Thrones, not as a spectator, but as a real character with a real story and importance? If so, then you’ll love The Mortality Machine brought to us by Sinking Ship Creations. This is not ordinary theater! It is a theatrical roller-coaster of experiential drama that immerses you in the world of the play and you and, no one else, can make their own decisions that effect everything. It’s astonishing what the cast and crew accomplishes in the little space they have to work with.

Ok, so after the hype of Sleep No More, I was a little skeptical about this production, but I decided to give it a chance and I am glad I did. Everyone’s journey on this quest begins when you enter the door. You start by entering this dingy hole in the wall apartment looking building and I was hesitant to say the least. But then, (after two very nice men carried down my wheelchair for me) I was given a character. I read it, still wondering why I came out of my warm apartment for this.  But then the magic happened. And it was magic. The doors shut and we forced to play our roles or sit there idly for two and a half hours. I opted to give it a shot and join in. Hey I’m an actor, so why not right? But I quickly learned that you don’t need to be an actor to enjoy the event that unfolds before your eyes and that you partly create for yourself.

This will be a short review, not because Sinking Ships, cast, and crew are not praiseworthy, they are But, out of fairness for you and them, I don’t want to give too much away. Simply go see the “show” and give yourself over to it. It’s unbelievable fun when you allow yourself to surrender to the world they create. I must give my hats off to Kelsey Rondeou and Raphael Svarin who were unbelievably committed to their characters and whom I “chose” to interact with the most. This was a theatrical role playing event that I will not soon forget! Go see it now and don’t judge it until it’s over…things are not what they appear.

The out-and-out doggedness that fuels The Seeing Place’s artistic choices is the theater company equivalent to Donald Trump and his border wall—they seem to have no misgivings about digging in to deep, dark, divisive material they know may only please half the audience. But as Gustav Klimt once said: “If you can’t please everyone with your deeds and your art, please just a few.”

Typically they do please me at least, but admittedly I had a better time at their previous work The Hysteria of Doctor Faustus. Their new work, though, two intense short plays in one evening, both two-handers, at least serves up the intensity you would expect from The Seeing Place: A Number, by Caryl Churchill, and ‘night, Mother, by Marsha Norman.

Churchill’s A NUMBER—a philosophical investigation into free will and the question of nature verses nurture—explores the issue of human cloning through the relationships between a father and his three sons.

Norman’s ‘NIGHT, MOTHER—winner of the 1983 Pulitzer Prize for Drama—begins with Jessie calmly telling her Mama that by morning she plans to commit suicide. The subsequent dialogue slowly reveals Jessie’s reasons for her decision.

Despite the two scripts being penned by renowned playwrights, I wasn’t blown away by either show. Part of the problem, specifically with A Number, was that, for me, one half of the cast (again, there are only two people in it), was completely ineffectual. I’m still slightly flummoxed by why they wouldn’t have cast a better actor.

Brandon Walker, on the other hand—the “other half” of the cast, who adroitly plays three different “son” clones—much like a Joaquin Phoenix or a Colin Ferrell, has that innate dangerous quality to his work—you never quite know what he’s going to do next. That “unsettling” quality is not something you get treated to from most actors. There are moments his instincts fail him and he flirts with over-acting, but as he grows as an actor he’ll learn to harness that cauldron of chaos into consistently brilliant turns.

The Seeing Place @ the Paradise Factory