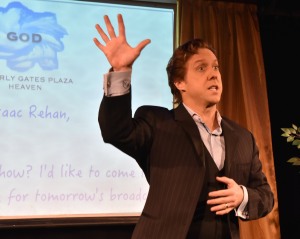 What happens when a prosperous interfaith televangelist receives a mysterious letter and invites God as a guest on his television show? Will stark, unsettling confessions be revealed? With a man like Dr. Thomas Isaac Rehan, what drives him to embrace the possibility of an unknown man to perhaps be the Lord made corporeal? How will this satire of prosperity theology (the belief that faith is made tangible through financial contributions) upend our beliefs?

It appears this play was commissioned with the intent that this “controversial, funny, and philosophical” work would result in “shouting matches to begin after performances”. Unfortunately, the work falls flat in attempting to be risky, to be a source of unexpected humor, or to emerge as a nascent topic for discussion. The production feels like a period piece in retrospect; it would be a daring, satirical production forty or fifty years ago. For example, Charles Farah Jr’s rebuttal to the actions of his former employer, Oral Roberts, in the influential book FROM THE PINNACLE OF THE TEMPLE– (written in 1979!) was considered a landmark tome at this time, being brave enough to give breath to the potential impurity of televangelism.

For those still reading, I want you to go and find yourself a chair right now, because what I’m about to say may cause you to lose your bearing and collapse in awe. Did you know that televangelists “may” not be the most altruistic people? Did you know that many of them pocket the money their parish gives them, spending the bulk of it on gaudy displays of wealth? Also, (and if you have a monocle, now’s the time to remove it before you become so shocked that it falls right into your steaming cup of tea) Did you know that the Bible may not be the direct word of God, but perhaps manipulated and padded over millennia by a host of self-serving men?

In this production, Iacovelli’s set is perfectly rendered to capture the drab earth tones of a 70’s era religious broadcasting set. Maggie Bofill as Roberta is utterly wasted. There’s so much more that could have been fleshed out for this character, the poor soul who does Dr. Rehan’s makeup and fetches his food, and yet also serves as his devoted stage manager. Why does she choose to do so much for him? Why does Dr. Rehan allow her to shoulder so many duties? How does witnessing her creator affect her? She’s little more than a prop whose suffering exists to make Dr. Rehan look even more spiritually corrupt.

There are few revelations and surprises. The internal logic of the play refuses to adhere by its own rules. Why can God in one moment claim they have no control over the weather or human nature, but then be able to wield power enough to paralyze Dr. Rehan and force him to quote scripture for their petty entertainment? Why is the choice made to make Dr. Rehan Satan disguised on Earth (rather than just a mortal descended from God’s original blueprint? Wouldn’t that make for a stronger, more complex assessment of brutal humanity confronted by their Creator?) Would the Devil be so reckless to invite his greatest foe on live television to reveal his secret and usurp his power over God’s ignored works? And since he’s the Devil, why would God’s discourse on a more altruistic and hands-off approach to his creations surprise and astonish him? He’s known God’s true mind , God’s definitive opinions since the world was made. Theses questions leave us baffled and detract from the impact of the play.

Unfortunately, God, played by Lou Liberatore, is disappointing, not due to a lack of talent, that is clear, but due to his inability to memorize his lines. His frequent need to call for line takes us completely out of the world of the play. If the show must really go on, one must wonder why Liberatore did not just simply ad lib until he found his footing and continued on. It’s not like we would have known any better. To be fair, there was a large amount of dialogue for Liberatore to cope with but c’est la vie. One can only hope that this otherwise fine actor will resolve this issue in future performances.

Yet, the show has potential, especially with the stunning performance put forth by Christoher Sutton, who literally speaks for almost ten minutes at the opening and to his credit, we never lose interest. Go to this show to watch Sutton. Get yourself a lesson on how to take any script and squeeze any possible bit of humanity into it. Sutton as Dr. Rehan is so damn charismatic and gentle, with every word he speaks feeling measured and alive. There’s such an earnest lightness to Sutton’s work that for a while the other troubling issues of the production faded into the background. Sutton is alone worth the price of admission.

God Shows Up is produced by Eric Krebs and runs until February 21st at The Playroom Theater (151 West 46th St, 8th Floor)