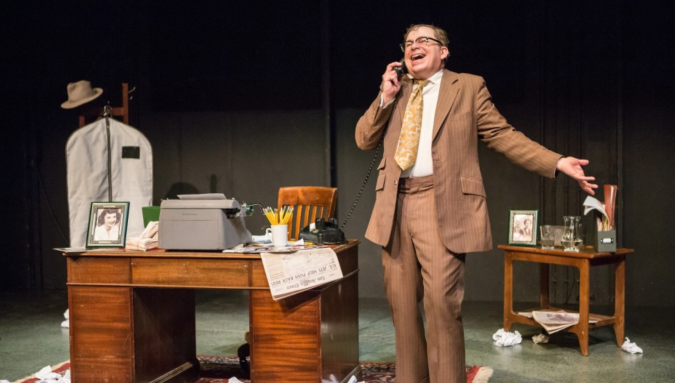 Bernie Lutz (Phil Johnson) in his one-man show about being blacklisted in 1950’s Hollywood.

Have you heard of the Jewish woman who was a kleptomaniac? One day she goes into a store and steals a can of peaches. On her way out, she’s caught, arrested, and brought before a judge. “What you did is disgraceful,” the judge reprimands her. “There were six peaches in that can… so I am giving you six days in jail, one for each peach.”

Suddenly the woman’s husband, seated in back, stands up and shouts: “She also stole a can of peas!”

There were a few of these jokes that really killed, read from notecards by headliner Bernie Lutz (Phil Johnson) at sporadic times throughout the evening when he’s feeling like he—or us—needs defibrillators. And that’s the problem here: For a “dramedy” that surely fancies itself more comedy than drama, having the majority of laughs coming from the occasional joke read off a notecard felt a little cheap.

In A Jewish Joke, Bernie Lutz (Phil Johnson) is a curmudgeonly Jewish comedy screenwriter from MGM, who comes up against the Communist blacklist in 1950’s Hollywood. The play—a one-person show set entirely in Lutz’s cramped, corner office somewhere on a Southern California studio lot—comes from the Roustabouts Theater Company, was written by Marni Freedman and Phil Johnson, directed by David Ellenstein, and runs through March 31st at the Lion Theater on Theater Row.

As far as I could tell, I was the only person in the theater under 50, maybe even 60. On one hand, AJJ isn’t exactly intended for my demographic, but on the other far stronger hand, a good story is a good story is a good story, and despite my being an old-souled millennial who was once a caregiver for a Jewish Holocaust survivor, I left the theater uninspired. Ultimately, AJJ—dubbed “A poignant dramedy about one American’s fight against one of the darkest moments of the mid-20th Century”—had no poignancy, hardly a fight, and no darkness; there was nothing that penetrated the skin, nothing that shed any new or different light on the blacklist movement. Music would have helped; a large screen with images playing concurrent to the action would have helped – how could a director of an Off-Broadway play, in the year 2019, not think to use either of these storytelling techniques? It would have added pennies to the budget, and the audience would have experienced a more affecting show.

But I’m only a reviewer.

In Phil Johnson’s defense, the cards were stacked against the play from the beginning, because the script itself gave a reasonably entertaining actor nothing to really work with aside from one-liners and empty pleas for us to care about his plight as a blacklisted Hollywood screenwriter. (Johnson also co-penned the script, so maybe I’m being kind here.)

The play is set in a high-strung, once-successful screenwriter’s dingy office, with scripts and papers strewn about, the phone ringing off the hook every two minutes from either a studio head rejecting his script or his secretary telling him they’ve got “so and so on the line”—with all this going on, Johnson, Freedman and Ellenstein would like you to believe you’re being entertained. But it’s hard to be entertained when you’re not simultaneously being moved.

All we’re getting here is a borderline unlikable comedy writer fumbling around his office answering phone calls for 90 minutes with no intermission. We don’t feel his pain as a blacklisted writer, as a Jew, as a human in crisis, or as any form that he is, because everything is going too fast and there are no moments of silence, empathy or reflection.

There is one touching moment—in the middle of the show when Lutz turns to the audience, for once not in the mood to try and amuse us, and tells us about the day he met his wife: “It was the best stroll of my life,” he says, taking a pause before returning to the chaos of his day.

Too bad there weren’t more of these.

See this show for the 2 or 3 zingers you can regift at the next cocktail party.