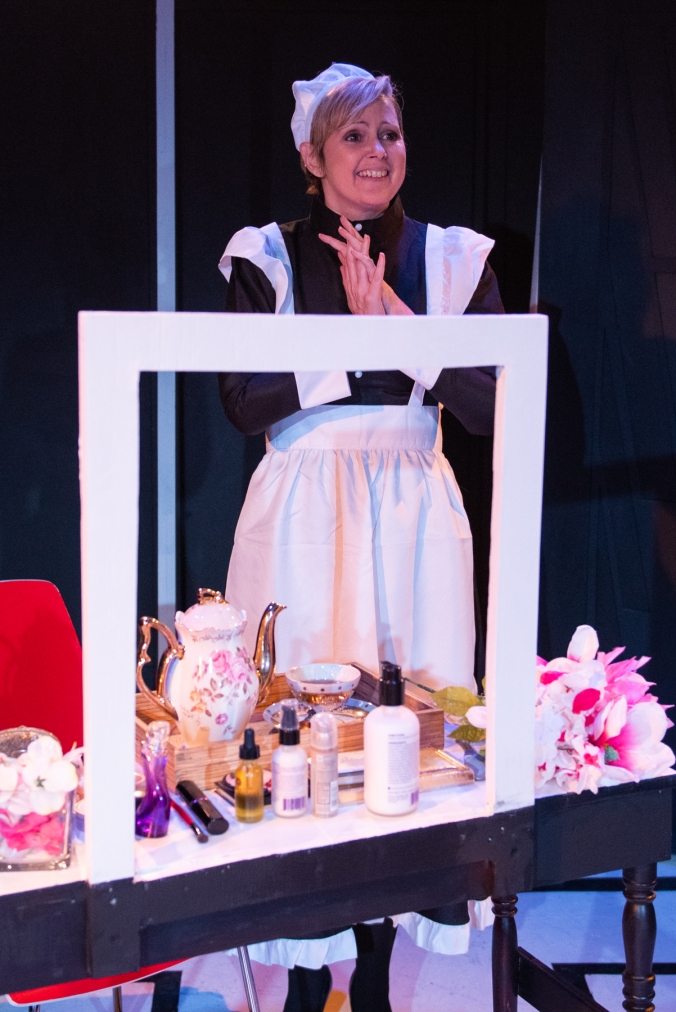 After being a critic for 12 years now, I have seen a lot of theater, both good and bad. However, I also am an actor with Cerebral Palsy. This causes me to push through my physical limitations and attempt to deliver a good performance when I’m on stage. Now, of course, what is considered “good” is entirely subjective. But I fight for every moment I act. I just finished a three week run of a play called Identity, where I went beyond what I thought was physically possible for myself. I started to uncover a new aspect of my acting that surprised me and seemed to enhance the quality of my work on stage.
Rarely have I seen another actor with such physical issues similar to mine.

Then I saw The Maids brought to us by The Seeing Place Theater. Enter Erin Cronican, one of the most talented actors I know. Sadly, she is battling severe cancer, stage four Breast Cancer. However, she does not stop this from delivering a riveting performance. Now, most actors I know, would have let their disease take over and refuse to attempt performing an 80 minute play, which has heavy line requirements. Does this stop her, no! Her tenacity is awe-inspiring. But this is not an article about her pushing through cancer and applauding her for it. (Although, I do) And it’s not about sympathy for her or me, it’s about acting.

After watching her performance and witnessing her physically fight for every line she says and earn every moment she delivers, it dawned on me that all acting should be rooted in this high-stakes praxis that seems to derive when our bodies are impaired in some fashion. All too often actors miss opportunities to have authentic moments on stage because they just say the lines and sometimes gloss over their chances to have genuine moments on stage.

This brings me to my point of this article, actors should have to fight for every line, every word they utter on stage, like Cronican and I are forced to do. When you have to dig deep, going beyond your bodies comfort zone, something magical happens. I am not saying that our predicaments make us the best actors out there, but it does add a tangible element to our work that is different from what I commonly see in most acting. This revelation only came to me after seeing Cronican’s last two productions and then reflecting on my own experience after my production.

I do not think you have to have cancer or Cerebral Palsy to experience this in your performances. But, I do think it’s worth noting that when and if you make yourself fight for each and every moment on stage and have some physical awareness you will add a layer to your work that is beautiful, riveting, and organic. I urge you to see Cronican in The Maids which plays now through April 14, 2019 and allow yourself to see first hand how profound she is because of what she allows herself to experience and share with the audience.