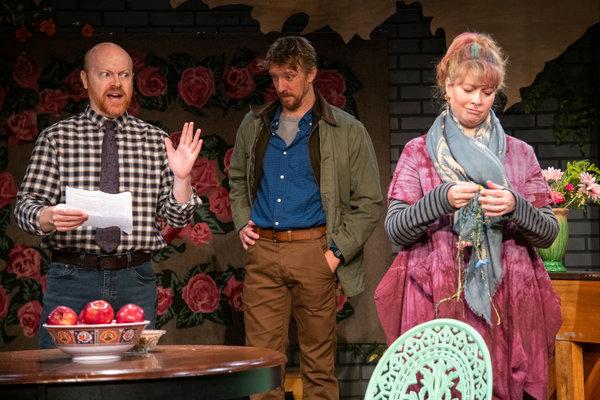 It is hard to deny the mastery of Anton Chekhov. His skill for writing rich profound characters is unquestionable. But what many people often forget is that his writing is meant to be seen as comical. I often debate this assertion because his characters are so serious. Then, I remember it is the severity of his characters predilections that make them funny. To everyone’s delight Aaron Posner manages to capture this Chekhovian quality that make his adaptation of Uncle Vanya, entitled Life Sucks, hysterical. To his credit, Posner does not simply make you laugh but manages to make you cry, sometimes at the same time.

Conforming to Checkhovian standards, Posners’ characters are all pining away for someone or something. For starters, the elder Professor brings home his much younger wife Ella who is the subject of everyone’s attention. Her beauty is at the center of the minds, hearts and genitals of all those she comes into contact with, including the virile Dr. Aster, Vanya, and Pickles. Sonia, the Professor’s daughter, is insanely jealous of Ella because Sonia is in love with Dr. Aster. And here we go, the insipid love/lust relationships that we have come to expect from Chekhov start and no one is left unaffected in its tornado like path.

Not only is Posner’s writing sharp, witty, and sardonic, but the performances are nuanced with such professional depth that we are engaged from the very first line to the last. At times, we are in a Brechtian atmosphere, being made publicly aware that we are watching a play, while at other moments the angst of each character is so palpable that we feel as if we are watching modern realism. The cast deserves most of the credit, although Jeff Wises’ direction is praiseworthy, for maneuvering us effortlessly between moments. Michael Schantz plays Dr. Aster alongside Nadia Bowers as Ella. Their fiery chemistry is so palpable that when they finally kiss, the explosion on stage is cataclysmic! And then the heart-wrenching performances delivered by Jeff Biehl as Vanya and Kimberly Chatterjee as Sonia, create an overall balance on stage pitched to perfection. Like the traditional Vanya, Biehl’s deep-seeded need to be loved is something that we can all relate to. His vulnerability on stage is as compelling as it is commendable to watch. There were several moments when Biehl and Chatterjee unveil their innermost desires, which could have easily turned into overindulgent acting, something I loathe on stage. Thankfully the actors are fine tuned enough to let these moments breathe without forcing them or making them predicated on something. They just happen and as simple as that, it hits us with unmistakable potency that is spellbinding to experience. It makes these soul-filled revelations, that feel almost confessional, much more profound because these actors are genuinely living through it.

Like a gourmet dish, this production’s recipe is masterful. It is definitely one of the finest pieces of theater that I have seen in a while (along with The Maids by the Seeing Place Theater). The lighter moments are just as poignant as the more serious ones. Everything comes together perfectly in this wonderful production. If you want quality theater that won’t break your budget, these shows are highly recommended.