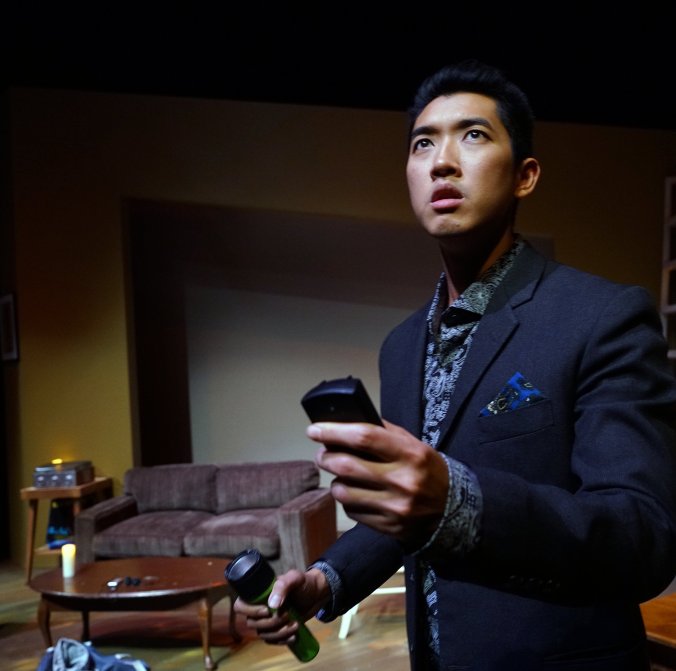 featured is Vin KridaKorn as Max

Throughout my years as a theater critic and avid theater-goer, I have never seen a play about the paranormal—that’s saying a lot, considering I’ve seen over 300 productions. So when I saw that Pan Asian Repertory was tackling The Brothers Paranormal, I, an admitted scaredy-cat, was as intrigued as I was skeptical. Despite a few minor glitches, I can definitely say yes. I was scared. But also moved.

This is the world premiere of a spine-tingling piece by Prince Gomolvilas. So where do ghosts, if they exist, come from, and why are they here? Max, who holds an MBA, has opened up a business to get to the heart of this question. With the help of his brother Jai, they will unearth these mysteries all together. Max admittedly is a non-believer and regards this business as a smokescreen, but a necessary way to make some money with his brother. Enter Delia, a woman in her 50’s convinced that her house is haunted by a ghost. Throughout the play, we see Tasance, Max’s mother, who committed suicide a few years ago. We are never quite sure if she represents a ghost or a sign that Max is mentally unstable. We come to understand that sometimes the dead stay because the living aren’t ready to let them go or are unable to cross over into the next life due to unfinished business here on Earth. This certainly seems the case in Delia and her husband Felix’s situation. But is their “ghost” real and if so, why is Delia the only one who can see it? These are just some of the dilemmas and circumstances we sit with at the end of the first act. Act two gives us some answers and some unexpected twists that leave us on the edge of our seats.

The cast is well suited to tell this story. Vin KridaKorn is excellent as Max. This actor understands his character, and the emptiness he feels inside is tangible. He is our protagonist and we are with him every step of the way. His pain becomes our pain—he is so vulnerable that we can literally walk a mile in his shoes. Dawn L. Troupe does an equally compelling job as Delia. Her sheer terror over her encounters with the malevolent spirit make believers out of the audience, which is no small feat. Both KridaKorn and Troupe have great comic timing, making for standout performances. The scenes between the two of them are tender and their developing friendship is worth investing in. Also, memorable is Emily Kuroda as Tasance. Whether she is a ghost or not is undetectable because she has just the right amount of allusiveness to keep us guessing.

What makes this play special is its ability to constantly surprise us with unexpected twists and turns. Not only does it have moments of pure terror, but it makes us feel the characters humanity. Most horror films go in for the shock value alone. This one goes a step further, allowing us to feel for three-dimensional characters. This show will intrigue and shock you simultaneously, but yet, fascinatingly, you somehow leave with a sense of hope.