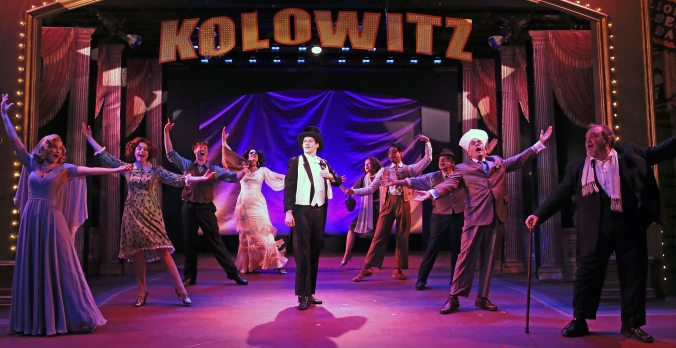 To kick off its 50th anniversary year, York Theatre Company has revived Enter Laughing, one of the most successful shows in the company’s history.

Originally a semi-autobiographical novel by Carl Reiner, it was adapted into a play by Joseph Stein and then a Broadway musical under the name So Long, 174th Street which ran for two weeks in 1976. In 2007, York Theatre Company excavated it and turned it into a great success. Twelve years later, and this revival seems like it will duplicate that success.

Enter Laughing is a charming love letter to the classic musical comedy, old-fashioned in the best possible way. David Kolowitz (Chris Dwan) is a starry-eyed, girl-crazy delivery boy who dreams of becoming a famous actor in the 1930s. When he lucks into a part with a free theatre company, he must learn to hone his (non-existent) craft while not disappointing his parents, boss and girlfriend. What follows is a literal comedy of errors.

This is a musical for people who love musicals. David’s dreams of stardom are portrayed with a childlike giddiness that never falters. The exuberant cast is in fine voice and play off each other well. Chris Dwan anchors the show well, endearing through all of David’s mishaps. Another standout was David Schramm as the stately actor Marlowe (and in one hilarious fantasy number as the butler), trying his best to wring a halfway decent performance out of the hapless David. The highlight of the show is David’s debut performance near the end of Act Two—an extended scene that was a masterpiece of timing and physical comedy. The songs are cheerful and catchy, the minimalist set and three-piece band perfectly evoke the Depression-era theater David would have played in.

This show is light on character and plot, a confection rather than a hearty meal. But if you are looking for something lighthearted to make you laugh and forget about everything going on in the world, then this is the show for you. The two hour and twenty minute run time flies by and you will definitely exit laughing.

Enter Laughing opens on May 16th and runs until June 9th, 2019 at the York Theatre Company at Saint Peter’s (54th Street and Lexington Avenue)