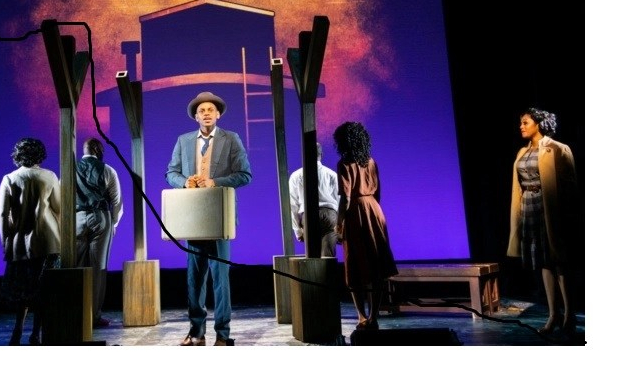 Have you ever wanted to be able to join in with others who were feeling something grand but you just couldn’t bring yourself to get wrapped up in the excitement? Then you know how I felt watching Till, as part of the New York Musical Festival. The production has all the elements required to be a great production: great singing and solid acting, but something did not add up here, and I was unable to emotionally connect with the piece.

Till, brought to us by Leo Schwartz and DC Cathro, tells us the infamous horrific story of Emmett Till, a 14-year-old boy killed in Mississippi during the Jim Crow period. Emmett is depicted as a charismatic young man who was killed by a white man because he whistled at his wife. This tragedy spread like wildfire and made history. It even caused the Emmett Till Civil Rights Bill to be signed into law by President Obama.

There are a few things that hurt the play’s appeal. The representations of the white racists were played by black actors wearing masks and the first time we encounter them in the play, they are caricatures. Tyla Collier laughs like a hyena, which at first is comical but goes on way too long and becomes distracting. This initial buffoonish portrayal makes it hard to see her as a murderous wife later in the piece.

Also, every time the momentum of the play began to pick up speed, a song interrupted the flow of the piece. I wish the actors sang with the same emotional intensity as they did when they were engaged in dialogue. I would start to connect with the story but the music, although gorgeously sung, took me out of the moment and killed any dramatic affectations that were intended.

The 90-minute musical spends too long getting to the main event, so when the climax happens, the audience has already checked out because we’ve long known what was coming. There is a big production number, meant to be an evangelical event at Emmett’s funeral. I understand this is a cultural phenomenon with deep roots in the black community, but it is so joyously sung and danced that it detracts from the severity of what Jim Crow and bigotry justified as acceptable behavior in the south. Again, the musicality undercut the profundity of the piece, which hurt its overall impact. The energy of the last number seemed at odds with the sadness of the situation. This disparity confused me about how I was supposed to feel.

Despite the music’s negative impact, it is sung by stellar vocalists. Judith Franklin brings down the house with her powerhouse ability. Taylor Blackman is wonderful as Emmett Till. He is infectious and steals your heart, making his untimely death more tragic. Dwelvan David is enigmatic as the preacher. His voice hits a sweet spot in your soul. These singers’ voices cut through you and are a delight to listen to.

The audience gave them a standing ovation and if I was complimenting their singing alone, I would have joined in. Sadly, as a cohesive piece of theater, this musical just did not work for me. 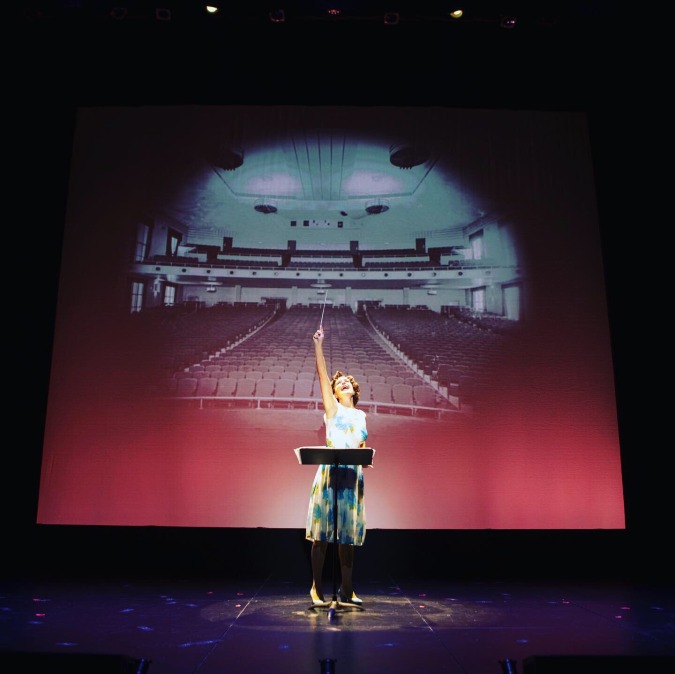 Krista Eyler in Overture the Musical. Photo by Steven Rosen

Overture the Musical is the official Grand Jury selection of the 2019 New York Musical Festival. It premiered in July 2018 at the Kansas City Fringe Festival where it was one of the highest attended productions. It had its first full production at Kansas City’s The Arts Asylum in September 2018.

This show is a love letter to music and the people who devote their lives to creating and supporting art in their communities. It’s also about letting go of the past to pursue a brighter future. Heartwarming with dashes of humor which prevent it from becoming saccharine, this is the perfect show for music and musical lovers.

The score is a light blend of traditional musical theater with touches of pop and samples of the classical music pieces that inspire the characters. I imagine it would be even better with a full orchestra. The book is tightly scripted with lighthearted fun and poignancy.

The cast, most of whom were part of the original Kansas City production, is excellent. Krista Eyler, the lyricist, composer and co-book writer also stars as Lily. Eyler is charming and soulful in her role, providing the emotional anchor for the show. Kay Noonan as Lily’s supervisor Inda Mae Beasley provides most of the comic relief with a playful wit.

This is a fun night at the theater, sure to leave audiences with a smile on their faces (and maybe a few tears).

Overture runs through July 28th at the Signature Theatre, 480 West 42nd Street. Tickets can be purchased at www.nymf.org 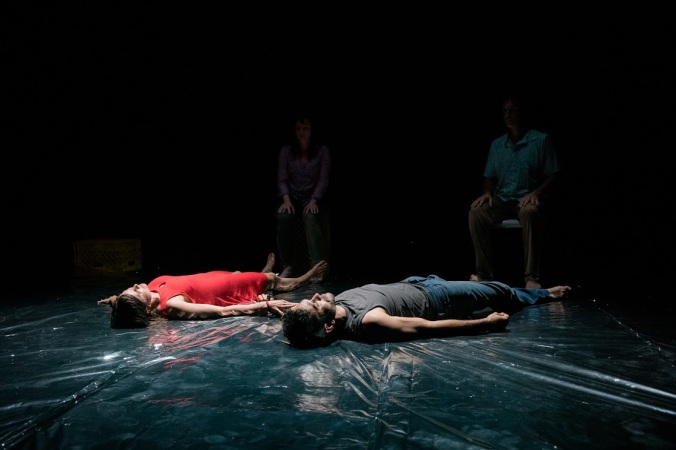 Heather Benton and Chris J. Cancel-Pomales with April Sweeney and Darrell Stokes in the background.

Four years after their children are lost in a terrible tragedy, married couple Else and Johnny return to Black Lake, the home of Cleo and Eddie and the scene of the disaster. Over the next several days, the couples grapple with their fraught connection with each other and the fact that they may not have truly known their children.

There is rich emotional material to be mined here but the story fails to come together in a cohesive arc that would allow for depth and clarity. Most of the play is spent elucidating what happened in the past but doesn’t give the characters any resolution in the present. The language has a poetic sensibility with lines often repeated for emotional emphasis. There are several haunting monologues but the highly stylized language seems to get in the actors’ way during the emotional confrontations. It’s unclear how much of this is down to the translation or to the original playwright’s style.

The staging is very sparse. The floor is covered with plastic paper and in the second half of the show, this is used to great effect. About midway through the play the actors return to the stage soaked to the skin and barefoot, referencing one of the biggest emotional revelations in the story. Thereafter, when one character crosses the stage to confront another (which happens frequently) they slip and slide on the wet plastic. It was a really creative way of conveying the messiness of the emotional dynamics.

There were other production choices that were odd such as the decision to have Else’s monologue about the children’s deaths sung. Heather Benton brings wonderful raw emotion to that speech but the choice to have it and nothing else in the show sung took me out of the moment. Every scene ends in a ten-second blackout which makes the pacing very choppy.

The cast is excellent, especially Chris J. Cancel-Pomales as Eddie, whose carefree and charismatic personality masks a desperate anxiety. Unfortunately, the script does not allow the actors to bring their characters’ arcs to their true potential. The fascinating premise and talent of the actors makes for several wonderful moments but without a tighter script they remain just a series of moments strung together to no resolution.

At Black Lake is the American premiere of a German play originally written by Dea Loher, presented by Necessary Digression. It runs through July 25th with performances at 3 PM on weekends and 7 PM on week days, at The Tank (312 West 36th Street). 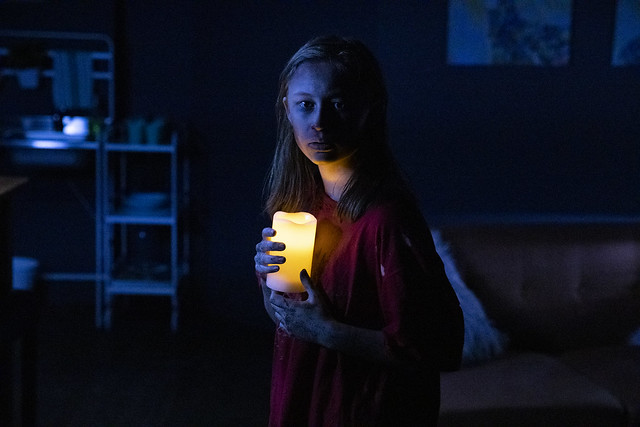 From the moment Not Even the Good Things starts one can appreciate the level of craft behind this production.

The lighting design of Alexander Le Vaillant Freer successfully sets the atmosphere from the start as the audience follows a single candle, and deftly carries the viewer through the many changes in mood that the play calls for. It is through Freer’s work that the production displays the elements of horror since the play itself downplays these in favor of creating a disconnect between the audience and the players. The irony effectively creates the sense of danger that wouldn’t exist if these elements were in conjunction.

And then, the actors enter the stage. The ensemble has no weak points. As actors they are always present, always saying something even when silent. The most complicated characters, the ones with the most decisive arcs are the first we meet Grace and Bill, played by Victoria Janicki and Sea McHale respectively. The other characters serve as foils to them. Coming into the stage to challenge them in different ways. And these two actors take the material given with assured confidence. Their performances anchor the show.

Those performances exist because writer Joseph Scott Ford has crafted an exciting blend of humor and pathos that lets these actors be electrifying on stage. He transitions through the emotional beats impeccably. And his dialogue is delightfully heavy with the unsaid, with the implied. Ford is at his best when focusing on these relationships and the specificity they carry. His instinct for what is most emotionally resonant never fails. That being said-

As a narrative, it lacks forward momentum. While the interactions are interesting, dynamic and well-crafted, the stakes aren’t raised as the play progresses. This takes away from the moment of catharsis at the end, because it was reached without a climax. Adding to this is the fact that the last beat of Bill’s arc arrives through a conversation between Jackie and him- a relationship that had been given little weight prior to this. The play’s haunting is mostly left at the periphery of the action and so Bill’s grief, though it bookends the play, and is the foundation of the thematic through-line, is never explored enough to justify it’s being the center of the narrative.

This problem is heightened by the challenges of the theater space. The set and the audience exist in very close proximity to each other making it difficult to follow anything that was staged too far downstage or on the floor. Because the set is small and there is no less than five actors on stage at times, director Kelsey Claire needed to use these areas to create a variety of stage pictures. For example, because the play heightens the mundane and the specter of “The girl” was placed on the floor for most of it, one forgot about her haunting for lengthy periods of time. Because that haunting seems to be a personification of Bill’s grief, and everything else happening on stage was so interesting, it was easy to dismiss his grief as well.

The final product has its flaws, but it is also immensely enjoyable. The choices made by this team of artists are incredibly strong from start to finish. One must thank Ford, for what was clearly a labor of love, and Claire for leading an impressive team of artists to create a thoroughly entertaining, at times rambunctious, piece of art, one that keeps you thinking once the lights go down.

Not Even the Good Things plays now through Saturday, July 27th in the Studio Theatre at Theatre Row 410 W 42st

Tickets can be bought for $35 at