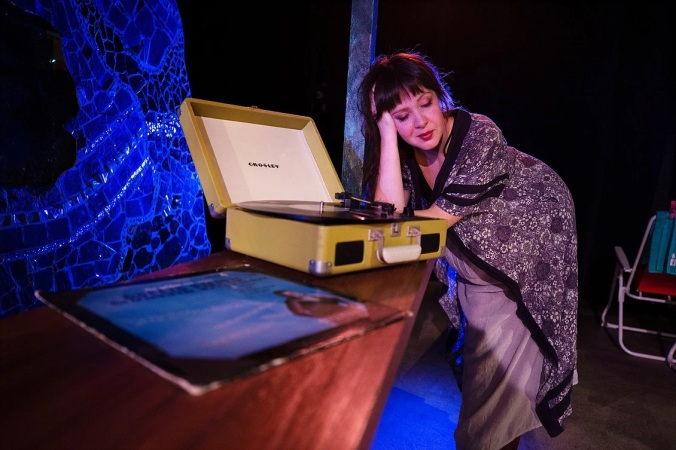 Elle Masters, played by Clare Latham, opens The Worth of Water with a failed performance due to her inability to sing in public.  It’s an apt metaphor for her brewing emotional crisis as a woman seeking artistic acceptance and financial independence, wondering if the effort is worthwhile to express herself and pondering what her life will become.  There is no better backdrop to ponder this than her mother Ethel, confidently played by Emmy nominee Kim Crow, inviting Elle and her sister Rebecca, a strict conservative from Minnesota, played by Christianna Greiert, to Weeki Wachee mermaid resort in Florida to celebrate her 70th birthday.  Rules are established about sexual flirting and socializing but they are quickly broken as Ethel embarrassingly pursues the attention of the resort’s male staff. Rebecca and Elle watch in amusement and vow never to turn out like mom, discussing how they have turned out in love and career. Rebecca’s criticism seems misplaced, however, as she learns her husband is leaving her for a younger woman.  Her self-righteousness seemed so hypocritical that a meltdown seemed inevitable. Don’t throw stones if you live in a glass house.

Despite the high caliber of actors I found the presentation lacking, either in the static dialogues that that seemed to go on and on, to failing to capture  the color, kitsch, and vitality of Weeki Wachee in the set design. At one point the audience watches cardboard puppets dangling in lit aquariums to represent the celebrating trio, but the stage is ironically empty of any supporting action or imagery, a bizarre juxtaposition.  Most disappointing is Elle’s discovery of her voice again, falling short in only singing a single extended note rather than any song or ballad to capture her resurfacing confidence, s bit of a letdown. The payoff in The Worth of Water left more to.be desired than the effort required.

the Worth of Water plays a limited Engagement at HERE Arts Center from October 4;to 20, 2019